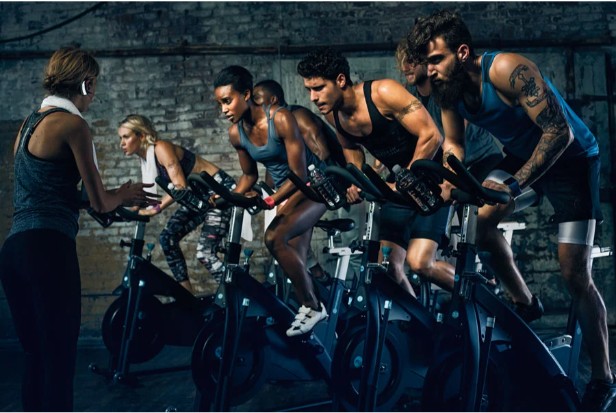 What Muscles Does Spinning Work? Benefits of Spinning

Fitness enthusiasts love indoor cycling, but which muscles are worked by spinning? Find out with our essential guide.

And what are the benefits of the spin class besides strengthening the muscles in the legs?

When your mind tries to convince you otherwise, having knowledge of the advantages of spin class can help you stay motivated.

Nowadays, it’s safe to assume that if you walk into a gym you’ll see at least a few spinning bikes. These stationary bikes may resemble cycling outdoors, but they can provide a much more demanding workout in many ways. According to research, spinning may even be better for your body’s composition, blood components, and physical fitness than regular cycling.

While you can choose to cycle alone, the majority of gyms also offer spinning classes. These courses typically last an hour, with the instructor controlling the pace. By adjusting the tension, you can simulate the uphill or downhill motions of outdoor cycling while making pedaling consume more energy.

The instructor’s motivational style makes many people enjoy spinning classes. Classes are frequently set to music, and it’s not unusual for people to attend primarily for the lively environment.

Regardless of your motivation, spinning can be a useful exercise to increase your fitness and develop your leg muscles. If controlling your weight is a goal of yours, it can also help.

What Muscles Does Spinning Work?

Like any form of cycling, spinning strengthens the muscles in your legs, but specifically what muscles does spin work?

The quadriceps, hamstrings, and glutes, which are the muscles of the legs, carry the majority of the weight when you’re spinning while seated on the saddle.

Less effort is put into the calves as well.

Your buttocks’ muscles are known as the glutes, or gluteal muscles. The gluteus maximus, medius, and minimus are the three main muscles of the glutes.

The biggest, strongest, and most significant muscle involved in the pedal stroke of a bicycle is the gluteus maximus.

When you push the pedal down toward the floor during the initial portion of the pedal stroke, this muscle is essential for hip extension.

If you imagine getting on the bike for a spin class, you have one leg extended with the foot close to the floor and one hip flexed so that the foot is up, ready to depress the pedal.

The glutes contract in this flexed position to aid in extending the hip so you can depress the pedal.

Your glutes can get stronger through spin class, especially if you up the resistance on the spin bike and start each pedal stroke with a strong hip extension.

Your quads are one of the main muscles used when spinning.

Four muscles that span the front of the thigh from the hip joint to the knee joint are collectively referred to as the quadriceps, or simply the quads.

The quads are “biarticular” muscles because they help flex the hip as well as extend the knee.

Consider the motion your legs make as you pedal the spin bike. Throughout the various phases of the pedal revolution, you’re constantly flexing your hip and extending your knee.

The quadriceps, in particular the rectus femoris muscle, contracts to straighten the knee during the downward portion of the pedal stroke.

For instance, studies that measured muscle activation using electromyography (EMG) discovered that the rectus femoris, the main muscle that runs down the middle of the thigh, is most active during the first and last quarter of the cycling pedal stroke.

Therefore, the first quarter entails the initial cranking of the pedal toward the floor until the foot is as far forward as it will go (and is halfway to the lowest position down by the floor).

Your foot is brought back up to the top of the stroke during the last quarter, from the position it reached earlier behind you.

The hamstrings are a set of muscles that run along the inside of your thighs and work against the quadriceps to help you move.

Semimembranosus, semitendinosus, and biceps femoris are the three muscles that make up the hamstring group.

The hamstrings are biarticular muscles like the quadriceps, but they extend the hip and flex the knee as opposed to the quadriceps’ flexion and extension of the hip.

Although spinning works the hamstrings throughout the cycling motion, the primary workload on the hamstrings occurs in the second half of the pedal stroke when you’re flexing the knee to return the leg to the starting position.

On a spin bike, the hamstrings are essentially engaged when you clip into the pedals to assist you in pulling the pedal back up to the starting position.

One of the main muscle groups worked by spinning is the hip flexors, especially if you are clipped into the pedals.

A group of muscles that aid in flexing the leg at the hip are referred to as the hip flexors and are situated at the front of the hip and pelvis.

The iliacus and psoas major, collectively known as the iliopsoas, are the main muscles in the hip flexor group. However, the rectus femoris, a quadriceps muscle, sartorius, and pectineus are also involved in hip flexion.

In order to assist in bringing the extended leg back up to the flexed starting position, the hip flexors contract concentrically during the second half of the cycling stroke.

In a lesser degree, the calves, which are the muscles in the back of the lower leg, are also worked during spin class.

The gastrocnemius and soleus are the two muscles that make up the calf muscle group.

The gastrocnemius is the stronger, larger, and more significant contributor to the cycling motion of the two muscles.

The motion that your foot makes when you depress the gas pedal can be compared to how the gastrocnemius aids in flexing the knee and plantar flexing the foot.

In order to help the hamstrings flex the knee on the return to the starting position portion of the pedal stroke, the calf muscles contract.

At the very bottom of the pedal stroke, when you press your foot down and plantarflex your ankle, driving your foot into the pedal, the calf muscles are also engaged.

Finally, since the spin bike pedals are attached to your feet at the balls, if you get out of the saddle and stand on the pedals, your calves will need to exert force to support your upright climbing position.

The tibialis anterior muscle runs down the inside of the front of the shin and helps “dorsiflex” the ankle – which can be thought of as bringing your toes up towards the ceiling.

The tibialis anterior works against the calf muscle’s movement in this way.

This muscle is engaged at the tail end of the pedal stroke to assist in lifting your toes and repositioning the pedal.

Other Muscles Worked by Spinning

Although spinning primarily targets the lower body, it can also tone the muscles in the core and upper body depending on your form and technique.

For instance, every time you get off the saddle and stand on the pedals, your triceps, shoulders, and core are all actively working.

What Are the Main Benefits of Spinning?

Leg muscles that are toned are the most obvious advantage of spinning. As our body composition improves, the proportion of fat to muscle mass decreases and increases. Microtears form in our working muscles as we exercise. The muscles are then repaired and rebuilt naturally through a process called muscle protein synthesis, which increases muscle mass while improving muscle adaptability.

The position you must maintain while spinning puts some strain on the muscles in your back and upper body. As a result, spinning may also help tonify these areas.

We expend a lot of energy while spinning because these muscles are engaged. High-intensity interval training (HIIT), which is thought to increase calorie burning, is frequently used in spin classes. Your heart rate will fluctuate throughout the class as you alternate between pedaling with heavy and light resistance.

Being healthy does not equate to having lost weight. However, having a lot of extra body fat may increase your risk of getting health issues like type 2 diabetes.

A great cardiovascular workout is spinning. In other words, spinning makes our hearts work harder, which can benefit our overall heart health. Regular spinning helps our muscles draw oxygen from our blood more effectively, reducing the physical strain on the heart over time.

According to research, those who cycle have a lower risk of developing heart issues, such as heart attacks and heart disease, than those who do not.

This is due to the fact that regular spinning can lower blood pressure, lower stress hormones, and raise our “good” cholesterol. This lowers our risk of developing type 2 diabetes and reduces the likelihood of inflammation in the body.

Another study discovered that spinning for an hour causes the release of blood chemicals linked to stress or changes in the heart. According to the research, these might promote the renewal and repair of blood vessels.

Overall, Using a Spin Bike Requires Effort from So Many Parts of Your Body. While You Can Increase the Intensity Level of Your Spin Bike Workouts as You See Fit, It’s a Less Strenuous Activity Than Some Other Popular Workouts, Which Means Less Risk of Injury. Building All These Muscles With a Spin Bike Will Improve Your Overall Health Dramatically.